Saturday, August 29, 2009 / Posted by Sharat /
Well this one was certainly one of the most challenging and most thrilling tour we had. We were 4 of us Me, Anand Vardhan, Ravi and Arun Dixit.

The places we had decided to visit included BR Hills, Ooty, and Gopalaswamy Betta. We saw many other places on the way.

Day1:
Left Bangalore at 6am and reached Shivanasamudra at 9am. After spending some time in both Bharachukki and Gagana chukki we left to Talakadu. The road towards Talakadu is one of the worst in karnataka. Reached there at 12 in the noon. It took almost 1 hour to travel 25km from shivanasamudra to talakadu. 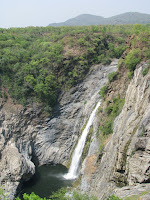 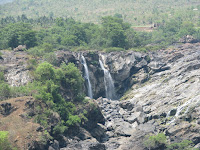 Had a blast in Talakadu as there was nice water around us. After having lunch at one local hotel we left Talakadu. 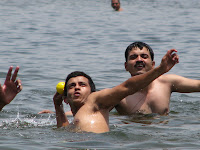 It was already 3pm and we canceled our visit to Somanathpura temple. We reached the checkpost near BR Hills at 5pm. Just before the checkpost there is one dam where we spent some time. It was a surprise package of the tour as the landscape looked beautiful. 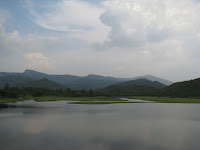 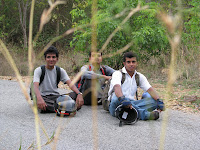 From the check post its around 15km to BR hills. Forest staff informed us not to stop anywhere till we reach BR hills as animals around may attack us. However we stop at one location to take photographs. Reached BR Hills at 6.30pm and our first job was to find lodge for the night and we got one. Visited Ranganatha Swamy temple at night and went to sleep. Dont Forget to buy Purest form of Honey here. The most purest honey I have ever tasted. Wow.....!!

Woke up very early to see the Sunrise from top of hill. Sunrise was as beautiful as expected. 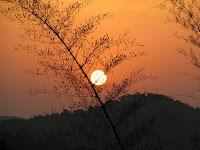 Next stop was K.Gudi.K. Gudi stands for Kyatarayana Gudi. This place is known for jungle resorts and Jungle safari. There are few government resorts in K gudi. This place is around 17km from BR Hills and the road was awesome. We could see a lot of deers, Bison, Peacock and many variety of birds on roadsides. 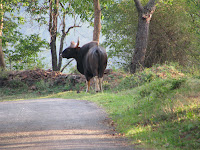 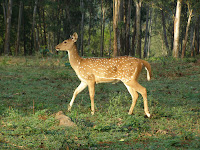 Few kilometers from K.Gudi check-post , We saw a Tiger crossing the road. We just couldn't believe our eyes. We were fortunate that the tiger was not hungry...!!! We stopped for a minute or two and continued our journey. 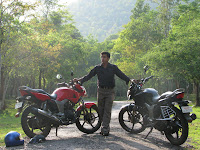 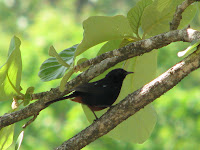 The road from K.Gudi was very bad. Had a nice breakfast at Gundlupet. Our next destination was Gopalswamy betta. We reached at 11.30. There was along queue inside the temple and therefore we skipped that. The scenery around the temple is awesome. We could see many elephants near the temple. 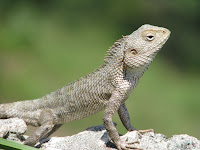 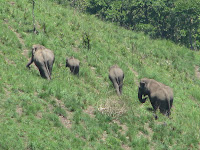 We had planned to reach Ooty via Bandipur before 4pm. There were 2 routes to reach Ooty. One is via Masinagudi and the other one via Gudalur. We chose the first one and thought we can comeback via gudalur. Masinagudi route has 36 very sharp hairpin curves and can challenge any 2 or 4 wheelers although this route reduces journey by 20km compared to Gudalur route.

We reached Ooty at 3.30pm. Ooty was jam packed with tourists as it was long weekend. We waited for an hour for the Boating tickets but we could not get. 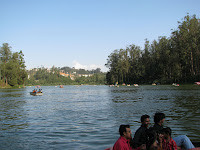 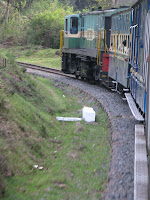 We then thought of going to Coonoor by the train. The last train was at 6pm. Even the train was full of tourists. It is the same place where the famous song "Chaiya Chaiya" from Dil Se was shot. Reached coonor at 7pm. Started searching for lodge and got one after searching for 2 hours with the help of an auto driver. We needed to go back to Ooty to get our bikes. When we reached Ooty it was 10.30. We had parked our bikes in railway station. Bribed the police at the station to get the bikes. It was very cold (4-5 Degrees) and riding the bike in that weather added some adventure to the trip. Back to hotel at 12.30.

Visited the SIM's Park in the morning which was not even as good as our LalBagh. Not a worth visit. 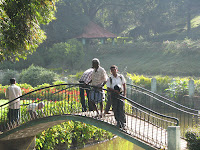 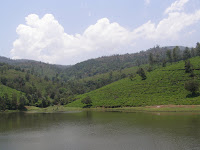 Left Coonoor at 10am. Reached Gudalur at 2pm via Ooty. We stopped at couple of places to take photographs. Riding on these roads will please everyone. Roads are good and the landscape is just awesome. Its better to go to Ooty via Gudalur and comeback via Masinagudi rather than the reverse path we took.