Hogenakkal falls is called Nayagara Falls of India. It is situated on the border of Karnataka and Tamilnadu. There are two routes to reach the place. One is via Hosur and Krishnagiri and the other one is taking shortest path at Hosur, but the roads are not good.

Me, VMH, Ravi, Adiga, Manju Bhat and Seena, 6 of us started from Bangalore on rainy morning on 3 bikes at 7.45am. We reached Krishnagiri at 9.30am. Vardhan joined us in Krishnagiri on highway. He had come from KGF. We had heavy breakfast in Krishnagiri

Reached the Falls at 1pm. The place was crowded with the tourists as it was long weekend. There were many people asking for Coracle(teppa in kannada) ride and Hogenakkal special Body massage. I had read in many blog about bargaining in hogenakkal and bargained a lot for Coracle ride but in vain as there were a lot of tourists on that day. Finally agreed for 1000 Rs including Entrance fee and Jeep charge for all 7 of us.

There are no safety precautions available for the coracle ride. Once on the coracle we don’t have the option but to believe in the Rower's experience and ability (Ambiga naa ninna nambide…!!!). However they are really experienced.

After few minutes of ride downstream we were on the other side of the river kaveri. We split up into a group of 3 and 4 so that it will be helpful for him to carry us near the falls. He carried 4 of us near the falls and went back upstream to get the other group.

The falls was breathtakingly beautiful. We went to the last point possible to take photographs.We could see rainbows near the falls which added to the beauty of the falls. 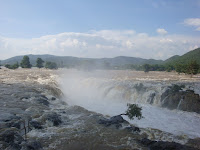 There is one viewpoint near the falls but a part of it was under water. We spent some time and again we were taken to the other side in 2 groups. Walked on the small trail upstream for few mins. And we all were taken to the starting point on coracle. It took us 2 hours for the ride. For Non vegetarians it will be a paradise as we can find fish and other stuffs everywhere.

We left Hogenakkal at 4.30. We chose shortest path to come back (130km). But the road was very bad for about 15kms. We were back to Bangalore at 8pm with couple of stops for evening snacks and other stuffs. Already started planning to visit the same place may be during January-February time to see other side or another view of the falls…!!!

First things first. Tadiandamol is a place near Virajpet in Madikeri District. Tadiandamol means "Highest Peak". It is less known place to many and therefore its neat and clean .

We had planned to conquer Tadiandamol peak on August 15th i.e Independence Day. We started our journey from Bangalore at around 12 in the noon. Since we were late in starting from Bangalore we had thought to reach the base of the hill before 5pm. We reached Nalknad Palace which is the base of Tadiandamol at 6.45 in the evening. We then decided to trek as much as possible during night. We had carried couple of torches and one emergency light.

We could find couple of flat places but it was occupied by many other groups already. We kept on climbing hill. There was cool breeze everywhere and therefore we didn't felt the tiredness. It was at around 9.45 that we found dense forest. We all thought it was time to camp instead of passing through the forest. We started to look for some flat places around the forest and suddenly we got one too. 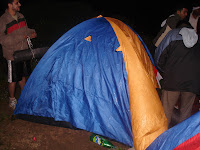 We started to put on our tents and wit hin few mins we could see 3 tents there. We had a carried eatables like Chapati's, Maddur Vada, curd, Chutney pudi etc with us. Had stomach full of dinner but we could hardly find any dry woods for camp fire and therefore went to sleep at 11pm. Wind was blowing heavily but thankfully it didn't rain that night.

We woke up at 5am to have a glimpse of Sunrise. As the light started brightening we saw that we had actually camped on the edge of another mountain..!! As the sun slowly started to rise and we could see spectacular sunrise. 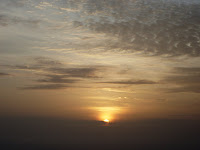 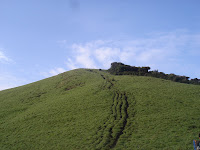 We packed all our tents and started our journey to the peak. It was actually 80% of the peak we had trekked last night. Within half an hour we were on the peak. 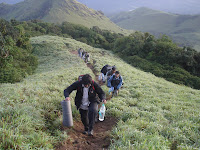 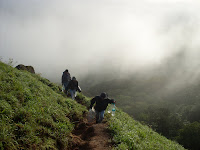 We had conquered TADIANDAMOL...!! We were on cloud nine literally ... Cloud was all over the place. 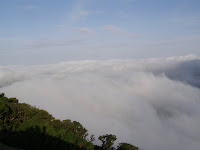 There were couple of people on the top who had camped there on the night. We took couple of photographs and started our way back to the base of the hill. We found one water source on the way back and had our breakfast (menu included bread-jam, cake, and some chapati's, Holige, biscuits etc).

We were at the base at around 10.30 and our vehicle was waiting for us. We visited Nalknad Palace. 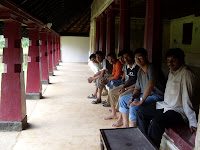 Started to move towards Chelevara Falls which is again a less known but beautiful place . Its around 10 kms from the palace. 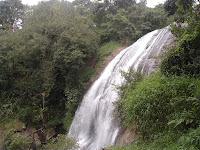 Reached the falls at 11.30. There were couple of visitors there and to our surprise there were some adventure lovers too there. There were some people doing Rappelling and we (Me, Ravi, DVD and Seena) tried too. We all were first timers. We really enjoyed rappelling down the Falls. It was really breathtaking.

We had nice bath in the falls. Enjoyed a lot at the falls and when we saw the watch it was already 2.30pm..!! We all hurried to the Tempo travellor and left to Virajpet . Reached there at 3pm. Had couple of Dosa's and left for Irpu Falls.

It was at 4.30 when we reached Irpu falls or Laksmana teertha Falls. Few mins of walk and we were at the falls. The falls is as beautiful as any other. 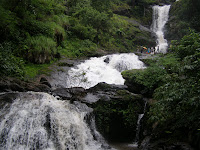 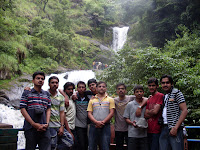 We didnt spent much time there and left for Bangalore at 5.30pm. We had to reach Nagarahole National park entrance before 6pm because its their closing time. And we were at the gate at sharp 5.55pm!!!

We could see thousands of deers roadside and also few elephants. we reached Bangalore at 11.30pm.

Things to Carry for trekking.
1) Good amount of Food. (such as roti,chapati,bread etc or else cook there with raw materials)
2) Water (atleast 2ltr can per person)
3) Good quality tent for camping on the top.
4) Salt to avoid leeches if trek during mansoon. (although we hardly come across leech)
5) Sleeping mat
6) First aid kit
7) Torches/Emergency light

Route:
1) Bangalore To Tadiandamol
Bangalore-Virajpet (250Km)- kaikambha(20km)-Nalknad Palace(4km)
Nalknad Palace is the base of the peak. From here 6km to the peak.